I’ve been watching new films recently – I wanted to write about this one.

It’s only been a few years since I discovered It’s a Wonderful Life, it not having travelled to the UK as a staple of the Christmas holidays in quite the same way it is in America. The main thing I came away with from that film was a strong respect for Jimmy Stewart. I’d never seen him in anything else, but I was content for that to be my experience of him – there are plenty of actors I’ve only seen in one film.

My appetite for more Jimmy Stewart was bizarrely whetted by an event I went to back in 2009 at the Glasgow Film Festival, where I was the director for a small film crew covering an event called Remembering Mary Gordon. Mary Gordon was a fairly fascinating Scottish woman who was an extra in a lot of American films, notably westerns and a Laurel & Hardy film. Amidst the films that were discussed was one featuring the lovely Jimmy Stewart, playing a character that was at the same time so similar but completely different than George Bailey.  At the time I thought “I must watch more of this odd tall man”, but did nothing more.

Jump forward to a few months ago, when I was bored and had just finished an article about Rear Window online. I knew it was a Hitchcock film, and had a good idea of what I was going to be watching, but I was genuinely surprised that Jimmy Stewart was in it. Jimmy Stewart? In a thriller? Everything I was given to understand about him was clearly wrong.

So I watched Rear Window, and I fell in love. With Grace Kelly.

Oh grace, you have my heart

Actually, more accurately, I fell back in love with Grace Kelly, because while I haven’t seen many classic films, I have seen many musicals, and she was the beautiful, charming heiress in the 1956 film High Society – a musical about a rich divorcee marrying a “common man done good” but dealing with two other love interests at the same time. It’s not the best musical ever, but it was enjoyable, and in my little girl way I’d fallen in love with no fewer than four (maybe five) cast members when I was young.

So here’s the effortlessly charming Jimmy Stewart with the beautiful and Charming Grace Kelly in a thriller with an interesting framing device – I loved it, and this time it was only a few months before I sought out Jimmy Stewart again, this time in The Philadelphia Story (1940).

I settled in to watch this film which was so highly recommended and was instantly faced with Cary Grant refraining from hitting Katherine Hepburn only to push her to the floor by her face. But it’s the 1940’s, right? So, It’s like slapstick comedy – I’d better settle in for the idea that this isn’t going to adhere to my 2013 standards in every way.

Just as I’m thinking this, there’s a page of exposition comes up and any analytical thoughts of the movie are wiped out by the names “Seth Lord” and “George Kittredge”. I know these names – but where do I know them from? 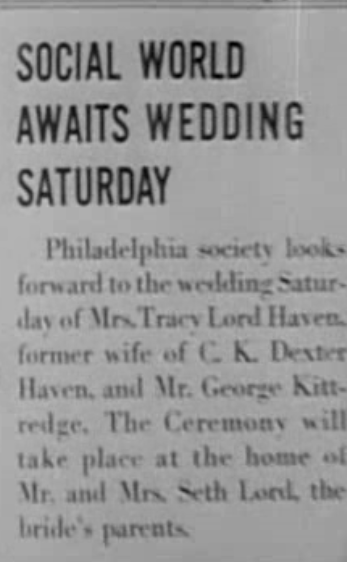 This is all oddly familiar

It didn’t take me long to realise that this film was about a rich divorcee marrying a “common man done good” but dealing with two other love interests at the same time. This is the movie High Society is based on (well, they’re both based on the play, actually).

So, what follows is my opinions and thoughts on the movie, but it’s also mostly just a comparison to High Society, because these films are word-for-word the same in places to the extent that in one scene I could hear the lines that would have prompted the song “who wants to be a millionaire” and for a moment I thought I heard the music starting.

So comparisons between The Philadelphia Story and High Society:

Which brings me round to a question I don’t know the answer to – why is it, when 16 years had passed between films, that High Society was so much fluffier? The Philadelphia Story has sub-plots about abuse and alcoholism, it has a strong female protagonist who’s actually a fairly three-dimensional character who can stand up to anyone, it has a few scenes so obviously talking about sex that they are only just subtext. Is it because High Society is a musical? Is it possible that we actually slid backwards in the 50’s, to that place where women were *more* stereotypical than before? Maybe it’s neither and both, and High Society was just a way to make a quick buck off the growing trend of musicals by using a script that had already proven itself in the cinema and adding Bing Crosby and Frank Sinatra.

Despite the comedy into – there’s actually a lot of comedy in The Philadelphia Story, just not as much slapstick as the into would suggest – it’s actually a really great story; having a three-dimensional female lead in 1940 who can hold her own with any man is amazing, but no character is really left behind here, with each one having more than just a two-dimensional portrait – each with their own flaws and quirks.

And despite it not being a musical, Jimmy Stewart sings. Heaven.

My friend Ben (Whose style I’m totally not sort-of stealing here) reviewed High Society for his 100 years of film project that you can find here.