The story, the excuses

I’m not an emotional person.

I think most people who know me, if asked to describe me in one-word answers might call me dependable, reliable, sensible, and so on. (Occasionally “Good singer” would probably slip through).

When other people break down, or their world goes to shit, mine tends to stay dependable. I keep my emotions hidden away in the dark and only let them out in lumps, normally late at night, normally when something has happened that has burst the dam and spilled everything else over. I cry, I rant, I tell David how everything sucks, and the next day I’m back to stability.

This is a good system. It’s served me well for many years. But now, I’m not coping well. I’ve never learned how to actually deal with my emotions.

Right now, I’m in honours year at Uni. I have a research paper (dissertation) to write. I have to create a half-hour radio piece, and it has to be perfect. I have to create a trailer for a game show (or other factual program) and do a 20 minute presentation to present it.

I have to deal with having no money. I have to pay the rent and the electric bill, as well as all the hundreds of little expenses that come along.

I have to do radio shows, and I have to do them well, or I feel guilty. I have to do scheduling for the station, and help people when they need help I have to deal with grievances when I do something badly, or when someone else needs to talk to an admin.

I’m choosing my words carefully here, because I know many of you are thinking “She doesn’t *have* to do any of these things.” And you’re right. I don’t technically have to do them. But if I don’t do them, I can’t look myself in the face and explain why.

I have to deal with hundreds of little injuries and the fact that I want to leave everything to the last minute. I have to try and keep the house clean, if not tidy.

I quit biting my nails in February. I started eating healthily the August before. I quit smoking the March before that. March 2010.

Except, in August 2010, when I was starting Uni, and I hadn’t been properly enrolled, and my life looked like it was about to come crumbling down around my ears, and I couldn’t cope. I had a cigarette then.

Except in July 2011, when I discovered David had lied to me for about the 8th time and had been smoking again. I took his cigarettes from his hiding place and smoked about a third of one on the front step.

Except today. I’ve had a cold for two months. My creative project needs to be scrapped and started again. I haven’t done the research for my research project that I needed to do. Whenever I come home I never do any work. I’ve skim-read one and a half books of the twenty-odd that I need to for my coursework.  Since I quit biting my nails I’ve put on a stone and a half. Half my family is ill or depressed, and I have no friends (in real life, the sort of friends whose house I could go to or who I could phone up).

Last night, lying in the bath sniffling with the cold and crying because I –can’t cope- I decided it would be okay to have a cigarette. All day today, I’ve been fighting the idea, and then, half an hour ago, I went in to the student shop in the Uni, bought ten Richmond Menthol King-size, and a box of Bluebell matches, and walking home from Uni, I smoked two of them.

I felt guilty, I smell awful, my mouth tastes like crap, but I also felt relaxed and slightly stoned.

And I’ve convinced myself that as long as I wait a week or more between them, to let my system get over it, I can have one from this packet if and when I need it.

My problems are all first-world problems. Let’s call the whaaambulence. So I have to deal with coursework? Everyone else manages it. So I’m emotionally repressed? Not breaking down in classes and at the drop of a hat is a good thing. So I have to read academic literature? Suck it up and see the above “Everyone else” point. I’m skint? And? I’m a spoiled brat. I’ve never gone without like others have, and I’ve a house and food. Radio? Novel? Album? Interviews? All voluntary. Don’t do them. Pride comes before the fall, and that’s all that is. Pride and stubbornness. Injuries? None of them are life-threatening, I’ve had worse before and got on fine. I have to clean my house? Fuck’s sake. Show me someone who doesn’t, and I’ll show you someone rich or clatty.

Not smoking is a case of just not doing it. Eating healthily is mostly a case of not buying crap. Well done on still not biting.

I have a cold? God forbid. I’ll cancel the Whaaaaambulence and just call a hearse.

This is how my brain looks on the inside. The excuses, the reasoning, the bitch who won’t accept either of the above. 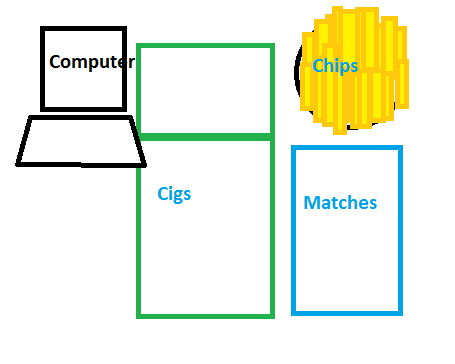 I tried to make this a funny wee drawing, but I'm not in the mood. 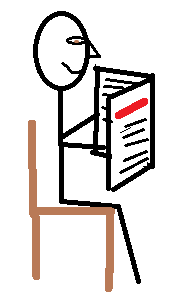 I realise that this next is the same level of question as the “Why do foods with LESS fat cost MORE to make”, but I don’t think the answer is the same.

I was looking at Google ebooks and the book on there are generally the same price as paperbacks.

A hardback book costs, say, £20. The paperback version costs around £8.

I assume this difference in price is because the production process for the Hardback costs more, as does the nice shiny card-stuff they use for the eponymous covers.
(Plus a bit extra on top, because any excuse to add to the price is a good one).

I assume a paperback costs as much as it does because you have to pay the following things:

• Writer
• Agent
• Publisher
• Press
• Cost of Printing
• Distribution
• Mark up for bookstores
I don’t know anything about book publishing, but these categories seem reasonable to me.

So why would the same book cost £8 on Google Ebooks?
The very nature of the e-book would seem to remove the Publisher, cost of printing, distribution, and book shop mark-up from the equation entirely.
So what costs might it add?
• Server space.
• Programmers
• Graphic artist
• Distribution programme
But these things are done en masse. Unlike a print run, which might have a cost of say, 50p per book, you instead have to have a personal page for the book, which might have cost you £30 in man-hours in design, server space and implementation; but this can be applied to all of your books. Or, at least, a lot of them. And just retrospectively; it’s to all the future books too. Apply the cost of this one page across all its uses and the price dwindles more.

So, my question again, is WHY THE HELL DOES AN EBOOK COST THE SAME AS A PAPERBACK.

(In related topics, DRM for ebooks is awful, and why does everything end in 99p in every context?) 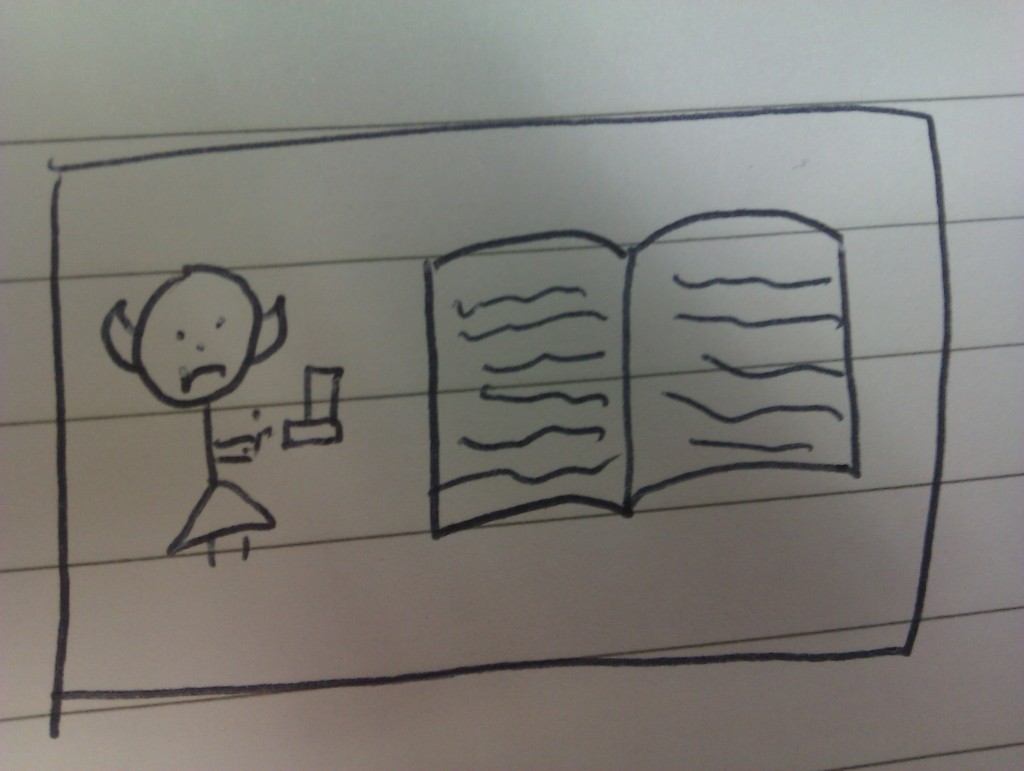 here is a drawing I did of a google elf making an ebook from a real book. Because you're special.

I hate how it looks right now, and I hate that I had to go with a service to make my site, instead of having control of it myself, BUT this one is *way* more functional than the old one, even if it does look like ass.

All the media links should work the same, but now you can comment on things! Cool!

Also, there are tags and… stuff. If you have any suggestions or can help make this more awesome at all, please do.

No, really, please, please do?

You can contact Jo at jem@jemontague.com (I hate mailto links).

Help save the endangered “Jo” from being homeless or, worse, internetless:

Age 3: Woodchips. A park. The ground. Excitement. Safety.
My mum tells me this is a trip to Edinburgh Zoo when I was about 3. I loved the woodchips, and was not bothered about the playpark things like the slide and the swings.

More memories.
Before I was 4: A double bed in a medium-sized room. Lying in bed with my mum being silly. David comes in, and I show him how I can wink. He shows me he can do it with either eye. I bury my face in the pillow and force my eye closed, showing him the results. He’s so silly, I’m so proud. I then taught myself to wink with either eye, much like I would again in primary three, but with fingers.
Before I was 4: A sofa, in a large room. It’s a fairly bare room, and I am sitting on a three-seater sofa across from a TV eating cerial. This is all of this memory. Not what was on TV, not what was happening at the time, just sitting there.
Before I was 5: Christmas morning. A huge tree (It’s not, but I was small), a me-sized perfect wicker chair, with a giant teddybear in it. he had a chain. It was love at first sight, and the joy I felt then is still in the back of my head, wrapped up in this memory like a special present. I don’t know when, but he came to be known as Mr Ted, and was my constant companion for about a decade.
Before I was 5: A kitchen. A birthday. A Postman Pat cake. Candles.

I have one other memory from this time, but it’s probably a bit long and I’ve run out of time. Next time!

I’ve been working on changing over the stock pictures to some I actually own (taken by my father). They’re no more relevant to the site than the stock photos, but hopefully they’ll give it it’s own flavour. Right now I’m also working on getting some more pages up; the news section, the podcast page, and the About page. I get a feeling there’s going to be some repeated information though.